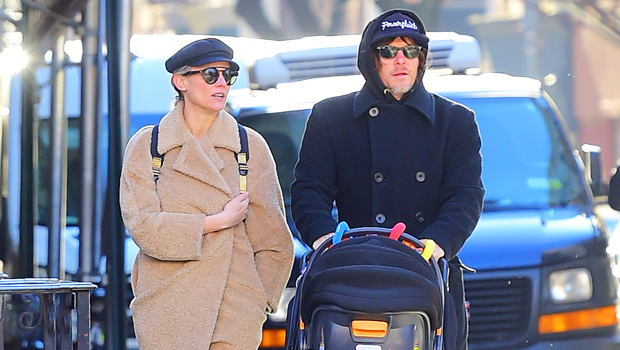 
After remaining mum on the issue for years since her birth, Norman Reedus is finally revealing the name of he and Diane Kruger‘s daughter. Speaking with TMZ while stopped at LAX, the Walking Dead star shared their 3-year-old’s name: Nova!

Norman, who’s remained incredibly private with Diane per their child’s name, shared that he was only ready to give the name since she’s older now vs. when she was just a little baby.

Although Diane and Norman have generally kept their child out of the public eye, Diane did share an Instagram photo of herself and Nova on the beach on March 23. In the photo, Diane sat on the beach at the mouth of the ocean in a pink-and-black leopard print one piece suit, accessorizing her beach day look with a pink bucket hat and white-rimmed sunnies. Her three-year-old sat in her lap in a pink one piece bathing suit, looking out at the ocean.

35 Cute Photos Of Celeb Moms Out With Their Kids: Gwen Stefani & More

“Where you at papa?” the actress captioned the post, shouting-out her hubby-to-be. “We girls miss you 🥰😢,” she adorably concluded, added.

“Papa” then showed up in the cutest way possible, writing “Nightshoots. miss u both ❤️“ in the comments. The actor was of course referring to filming for The Walking Dead, which is in its 11th and final season.

In a recent interview with The Sunday Telegraph, Diane reflected on her decision to wait to have a child. “I am so glad I did not have a kid at 30,” she told the outlet. “I think I would have absolutely resented it for all the things that you have to give up, because today I am happy to do so.”

Diane, who got engaged to her daughter’s father in August 2021, echoed those same sentiments for Net-A-Porter’s magazine Porter in 2019. “I was too selfish. By the time I got to about 35 [seven years ago], I thought, yes, I probably do want one. But then you have to wait for the right person to come along,” she shared. “I think as you grow older, you learn that things come to you when you’re ready for them,” she continued. “I’m glad I waited. [Norman’s] so calm, and he teaches me a lot, because he’s done it before.”