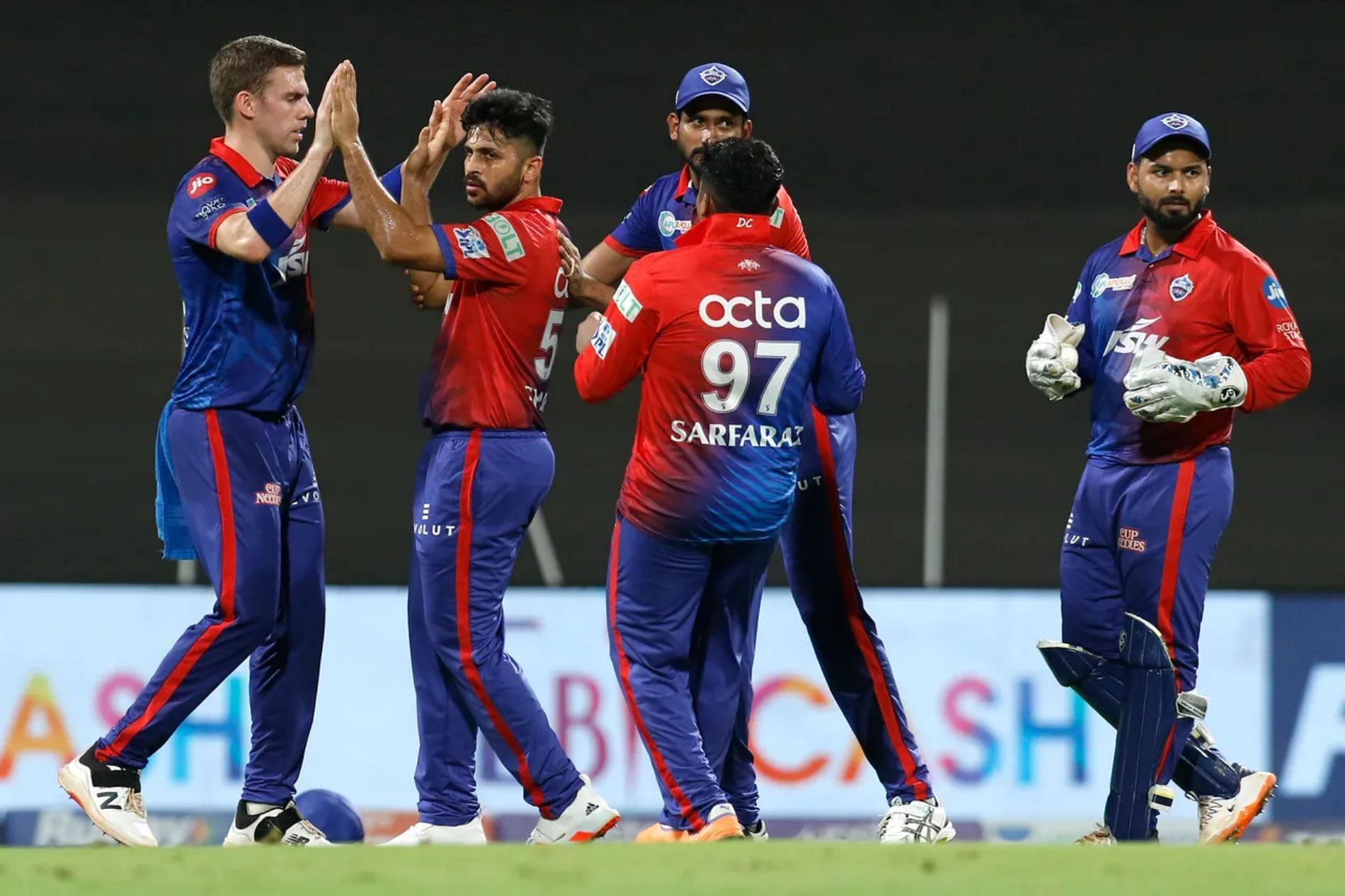 
The Delhi Capitals (DC) beat the Punjab Kings (PBKS) by 17 runs in Monday’s IPL match at the DY Patil Stadium in Navi Mumbai.

Bowling first after winning the toss, three-fers from Liam Livingstone and Arshdeep Singh helped PBKS restrict DC to 159/7. However, Shardul Thakur claimed four wickets, while spinners Axar Patel and Kuldeep Yadav chipped in with two each as DC held PBKS to 142/9.

Monday’s win lifted Delhi to fourth place in the table at 14 points and boosted their playoff hopes. Punjab, meanwhile, will have to clinch victory in their last league match to finish on 14 points. However, they would also need a lot of other results to go their way to sneak into the top four.

PBKS got off to a solid start in the chase as Jonny Bairstow looked in great touch once again. He struck four fours and a six inside the first four overs before Anrich Nortje’s bouncer did the trick for Delhi. Bairstow (28 off 15) top-edged a pacy short ball to deep square leg.

Thakur then struck twice in the last over of the powerplay. Bhanuka Rajapaksa (4) miscued a length ball towards backward point. Shikhar Dhawan (19) then nicked a back of a length delivery that bounced a little extra. After six overs, PBKS were in trouble at 54/3.

Things went from bad to worse for PBKS as captain Mayank Agarwal’s poor run with the bat continued. He was bowled for a duck by Axar, attempting a cut to a ball that skidded on.

PBKS lost half their side for 61 when Livingstone (3) charged down the track to Kuldeep but missed the ball completely and ended up being stumped. Harpreet Brar (1) was soon cleaned up by a wrong-un from Kuldeep that found its way through the gate.

The usually reliable David Warner dropped two catches but DC’s bowlers kept chipping away. Rishi Dhawan (4) was done in by an Axar arm ball and cleaned up. The aggressive Jitesh Sharma waged a lone battle for Punjab. He struck three fours and two sixes to give the team faint hopes of a victory.

Sharma’s fighting innings, however, ended on 44 off 34. He attempted to smack a Thakur knuckle ball but was caught by Warner, who charged in from long-off and took an excellent catch, diving forward.

Kagiso Rabada slammed a six over wide long-on but perished off the very next ball, slogging a slower ball from Thakur to long-off. Rahul Chahar (25* off 24) helped Punjab reduce the margin of defeat.

Livingstone (3/27) and Arshdeep (3/37) shone with the ball as PBKS restricted DC to 159/7 after winning the toss and bowling first. Mitchell Marsh (63 off 48) again shone for DC but could not find much support at the other end.

Punjab made an interesting decision to open the bowling with part-time spinner Livingstone. It proved to be a masterstroke as he sent the in-form Warner back off the first ball of the match. The left-hander was tempted into a drive outside off but only managed a thick edge to backward point. Sarfaraz Khan was supposed to take strike but Warner decided to face the first ball on seeing Livingstone come up to bowl.

Marsh then came in and smashed Rabada for consecutive sixes in the second over of the innings. Sarfaraz also looked in excellent touch and clubbed left-arm spinner Harpreet Brar for a six and two fours in the third over. He hit three more fours in the next two overs as Delhi began overcoming Warner’s loss.

However, Sarfaraz could not convert his blazing start. He fell for 32 off 16, miscuing a big hit off an Arshdeep slower ball.

Lalit Yadav briefly hung around with Marsh as the duo took Delhi to a decent 86/2 at the halfway stage of the innings. Having made 24 though, he became Arshdeep’s second victim. The right-hander was caught in two minds against a slower bouncer and, in the end, only managed to ramp the ball to backward point.

DC sank into further trouble as skipper Rishabh Pant (7) again threw his wicket away. Having whacked Livingstone for a one-handed six, he was stumped the next ball going for an aimless swish. Livingstone also sent back Rovman Powell (2) as the Delhi big-hitter mistimed a lofted hit to long-off.

Marsh brought up a patient fifty by smashing Brar for a boundary. His fine innings ended in the penultimate over when his pick-up shot over midwicket off Rabada ended in the hands of the fielder.

Livingstone and Arshdeep excelled with the ball for PBKS, claiming three scalps each. Their efforts were in vain though as, barring Jitesh Sharma, no other batter stood up to the challenge in the chase.

For DC, Marsh’s mature 63 off 48 ensured the team put up a competitive total. Thakur then hurt Punjab’s chase with figures of 4/36. After dismissing Rajapaksa and Dhawan in one over, he returned to end Jitesh’s resistance. Axar (2/14) and Kuldeep (2/14) kept up the pressure on Punjab’s batters.

Thakur was named ‘Player of the Match’ for his game-changing four-wicket haul..