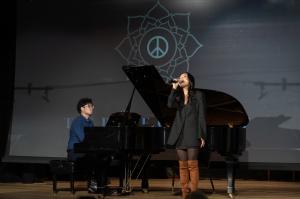 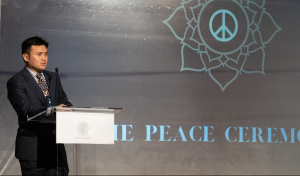 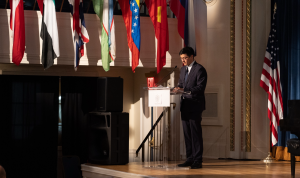 NEW YORK, NY, UNITED STATES, July 2, 2022 /EINPresswire.com/ — Under the flag of all the nations, a benefit concert for Myanmar refugees closes out. World renowned artists and reputable speakers including Professor Peter Winograd, Professor Adela J. Gondek, and the most famous Myanmar artist Ah Moon have participated in The Peace Ceremony Concert on June 17th, 2022.

The concert resembles the world’s empathy towards refugees in Myanmar, deepening the bond among humanity. New York City once again embodied its fraternity of mankind which the city uniquely has in the universe.

Myanmar is suffering from armed conflicts presented all around the country after the military coup that occurred in February 2021. Now the country topped 1 million refugees and is still increasing rapidly. The refugees suffer from poor living conditions, sexual assault, violence, and many other tortures. The situation is deeply concerning to two people, Peng and Zhechen. They started with a will simply to help Myanmar.

The world showed its welcoming side to The Peace Ceremony Concert, which quickly attracted a lot of people and organizations’ attention. Davis United World College Scholars Program soon hopped on board by providing the monetary resources to support the concert. Then International House generously provided their historical venue, Davis Hall, to host the benefit concert. Paolo Marchettini, Minghao Liu, Kevin Kyaw, Weiwei Zhai and many other world-renowned musicians joined the campaign by performing soul-touching music to support the cause.

Columbia University Saltzman Institute of War and Peace Studies shows their support by letting their representative, Tenzin Dorjee, come and give a powerful speech. The United Nations High Commissioner for Refugees also sends The Peace Ceremony a special thank you video to appreciate everyone’s efforts.

This New York City based campaign has achieved great success and gained attention from audiences across 20 nations. Peaceful music touched people’s hearts and profound speeches portrayed the sadness which the country is going through. June 17th 2022, New York City showed its care and empathy towards humanity on the other side of the Earth.

The Peace Ceremony Concert has ended, but the hope of peace never ends. The Peace Ceremony team is still actively raising awareness of the Myanmar humanitarian crisis through online media campaigns. Let’s spread the words and join the campaign to bring peace for Myanmar!

To learn more about The Peace Ceremony.

Be A Hero: Support Myanmar