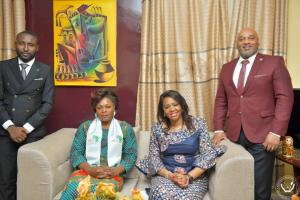 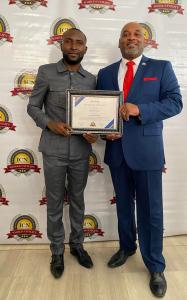 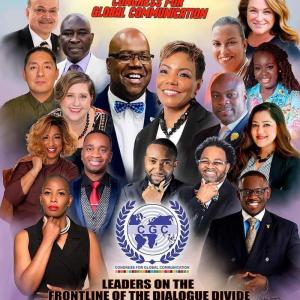 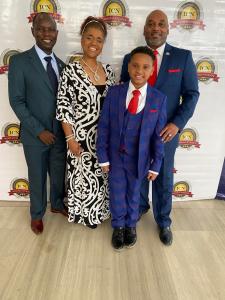 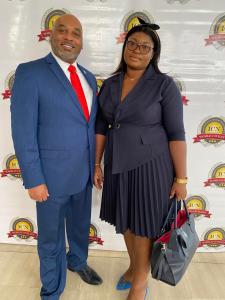 ICN Special Envoy Dr. Ruben West and Pamela Misenga Ilunga at Awards Ceremony in the Democratic Republic of the Congo

Billy Issa is a powerful youth force for Africa. The world would be better with more individuals with a mind and heart like Billy. He is a leader and his actions prove it.”

Billy Issa is currently one of the most prolific young emerging voices in leadership development and mental transformation of his generation in the African continent. He is a coach, international speaker, thinker, leadership consultant, best-selling author and social entrepreneur committed to the advancement of the Kingdom of God and the development of Africa.

Billy Issa is also the founder of Inspire 50 Women Conference & Network and Inspire 50 Young Women Conference & Network, initiatives of Billy Issa Leadership Int’l focused on promoting the leadership of African women and young women on the international stage. It is within this framework that he partnered with I Change Nations, a global leader in civility and the world’s largest building-honor culture network led by HRH. Sir Clyde Rivers and with Greatness University the world’s premier institution focused on discovering, developing, delivering and documenting greatness around the world led by Dr. Patrick Businge to annually award and celebrate African women who have distinguished themselves in their fields.

His first book “7 Key Factors for Exponential Personal and Organizational Growth” was acclaimed and recommended by millionaire entrepreneurs such as Luc Gerard Nyafe, Dr. Sunday Adelaja and international experts such as Dr. Jason Renville, Coach Alex Ihama, Ange Tranchida, Dr. Raymond Eneas, HRH Sir Clyde Rivers, and others. Billy Issa’s book is prefaced by a genius expert on leadership, youth and family in the person of his mentor Dr. Dave Burrows, successor to his father Dr. Myles Munroe, a leadership coach and mentor specializing in third world nations.

His vision and passion remains to travel across Africa and the world to train, inspire and produce game-changing leaders, catalysts of socio-organizational change and crisis solvers for organizations and nations.

In 2019 he received the Ambassador of Development and Social Award, Coaching category, an initiative of Kin Business Awards, alongside some of the country’s personalities such as Senator Didier Mumengi and Dr. Noel Tshiani.

Dr. Astell Collins is Guyana’s Distinguished Youth, Ambassador. He is also the UN Goodwill Ambassador and Global Representative for the Golden Rule International and Interfaith Peace-Building for the Caribbean States and its Territories.

Dr. Collins is the C.E.O. of (Better Defined One) BD1 Leadership and was the youngest Chairman of the Board of Directors for Habitat for Humanity Guyana. He has a mission to elevate mindsets and empower individuals for sustainable socio-economic upliftment.

Dr. Astell accomplishes this through education, innovation, and collaboration with individuals and partner organizations. He is also the Youth Advisor for P.A.N.C.C.P. Coordinating Unit (C.A.R.I.C.O.M.) and was appointed as the Special Envoy Representative to the Government of Guyana on behalf of the United States Global Leadership Council.

Dr. Collins is an exceptional thought leader and leadership strategist who has facilitated over 1000 seminars and speaking engagements nationally and internationally. He is the recipient of several prestigious awards, including the South Africa “IKUSASA-Special Recognition Award,” the United Nations “Golden Rule International Award,” and the U.S.A. “International Champions of His Community Award.”

Dr. Astell was included within an elite group of world leaders as he was awarded the “Global Leadership Award” at Capitol Hill, in Washington DC. Additionally, he received the World Civility Award and was appointed as a Civility Ambassador.

Dr. West was appointed Special Envoy for iChange Nations™ by the organization’s President and Founder, Dr. Clyde Rivers. Dr. West carries out his global mandate by identifying deserving individuals and submitting them to the organization for award consideration.

iChange NationsTM is a Culture of Honor System; the organization is committed to bringing back the lost art of honor by building a Culture of Honor that recognizes individuals worldwide who have exemplified extraordinary humanitarian efforts to change nations effectively.

According to ICN founder Dr. Clyde Rivers, ICN honors people and organizations that believe every life is valuable and is created to contribute to the world. iChange Nations™ is the largest “building cultures of honor” network globally.

“Every life is valuable and is created to bring a contribution to the world.”- Dr. Clyde Rivers.

Billy Issa is now in the company of several world leaders that the iChange Nations™ organization has awarded. Those leaders include:

Honored for his great leadership in establishing and maintaining peace in his country.

Honored for the AIDS awareness policy ABC (Abstinence, Birth Control, and Contraception) an

ever-present battle for the health of their people.

Honored for his efforts in the peace making process for Kenya, Sudan and Burundi.

Honored for the Anticorruption policies he implemented in Nigeria.

Honored for his efforts to build a better environment in his country.

Honored for her tireless efforts in protecting for women’s rights in the Republic of El Salvador.

Honored for his life’s work to establish peace in Zambia and on the continent of Africa.