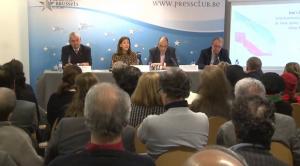 On Jan. 10, the International Committee in Search of Justice (ISJ) held a press conference at the Brussels Press Club to introduce a newly published book, entitled “Iran’s Democratic Revolution”.This book was written by European politicians and experts. 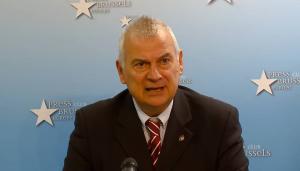 Former MEP Paulo Casaca: “These executions are blatant. There were no free trials. There was brutal torture and forced confessions. Two more were sentenced to death and taken to solitary confinement and were to be executed but were stopped due to mass protests.” 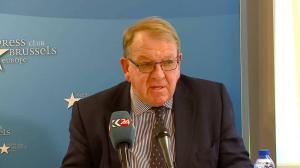 Former MEP Struan Stevenson: “The revolution has now gone on for four months. This shows the deep-rooted nature of the insurrection. Young people, led by women, have now become a recognized existential threat to the mullahs’ dictatorship.” 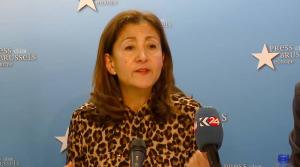 Former Colombian presidential candidate Ingrid Betancourt: “We want this revolution to succeed. We want the women in Iran to know that in the rest of the world, we are mobilized to help them. We want our government to give an official backup to Maryam Rajavi.” 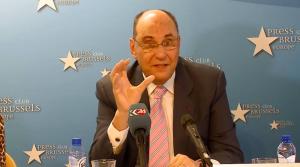 Former EU Parliament Vice President Alejo Vidal-Quadras: “if there is one organization that has the characteristics of an alternative able to lead the transition from dictatorship to democracy it is the NCRI led by Maryam Rajavi.”

Mr.Paulo Casaca: “Many years ago, Mrs. Rajavi said that women’s rights are human rights. But we seem to forget that women are human beings, especially in Iran.”

Mr. Alejo Vidal-Quadras: “The alternative must be pluralistic. It must include all political tendencies and religious beliefs. It must include liberals, conservatives, and left and right.””

The study which has been written by prominent European politicians and experts aims to provide a clear picture of how Iran has become a stage of fierce battles between its people and their democratic forces vis-a-vis the tyrannical dictatorships and their foreign backers.

A number of reporters as well as some representatives of diplomatic delegations based in Brussels participated in this conference and raised questions about the nationwide uprising of the Iranian people, the policy of the international community confronting Tehran, and the eventual prospects of a democratic revolution in the country.

“These executions are blatant. There were no free trials. There was brutal torture and forced confessions. Two more were sentenced to death and taken to solitary confinement and were to be executed but were stopped due to mass protests.” In reaction to these executions, the EU and the US issued condemnations. Are these condemnations sufficient? Should not the EU fully blacklist the IRGC as a terrorist organization? Shouldn’t we immediately expel the regime’s ambassadors, who are secret service agents who are affiliated with the regime’s terrorist activities? Shouldn’t we impose more serious sanctions on the regime? This is the context of the book that we are presenting today.

This is a revolution. This is not an ongoing protest of the Iranian people about how to dress. This is the first revolution in the world conducted by women. This will mark the history of nations. Many years ago, a woman said that women’s rights are human rights. This is obvious, but we seem to forget that women are human beings, especially in Iran.

“We here are fighting for our rights, too, in politics, in the business world, and salaries but what we see in Iran is about life. These women and the men supporting them are putting their lives at stake to protect their rights. They’re doing it for all of us, for humanity. If we don’t get this right, we won’t be able to fix the other problems in the world. We must address this fundamental problem, which is the space we give to women. People are dying because of this, men and women. As women are fighting for their rights, men are being attacked and persecuted by the regime to defy society. This is what the mullahs’ regime has always tried to do: defy society to impose its rule of segregation and abuse. It’s about humankind that we are speaking about today. There is a reality. In the world, we had never seen such a misogynistic regime as the one ruling Iran. We have seen glimpses of it, but in this systematic form of abusing power against women, we haven’t seen it. It should be something that we care about here in the West. When we supported the Iranian Resistance, we were targeted by the regime. We were the object of a terrorist attack attempted by three Iranian citizens, including an Iranian diplomat.”

“If we have a regime that is capable of killing its own people, its youth, if it’s a regime that is crazy enough to kill its own youth, imagine what they’re able to do with people who are not of their country. They have and will come after us. I’m saying this because I’m offended by the lack of action by our governments toward what is happening in Iran. They just summoned the ambassadors and expressed their outrage. We want more. They should start by calling back our ambassadors from Iran. And then we must shut down the regime’s embassies in our countries. And third, when we see what’s going on in Iran, we hear people saying they have to win this revolution, but who will be the leader? There is no one to build democracy. We know there is an option. It’s here. It’s the Iranian resistance. And it is a woman leading this resistance. And it should be a woman who leads the transition from a misogynistic regime to a democratic state. We need an official backup for a democratic woman leader that is fighting for Iran to become a peaceful, secular, and human rights–abiding country. We want this revolution to succeed. “We want the women in Iran to know that in the rest of the world, we are mobilized to help them. We want our government to give an official backup to Maryam Rajavi.” “There are many people, but only one organization can take over, and it is the National Council of Resistance of Iran (NCRI).”

There is a history of that in Iran. In 1953, there was a coup against the then-popular government of Mohammad Mossadegh. The coup was organized by the UK and the US. This coup was also in collusion with the Shah. It was also with the cooperation of the mullahs. Why did Mossadegh fail and why was the coup successful? Because the Mossadegh government didn’t have an active grassroots organization to counter the coup.

The alternative must have a plan of action. The plan must be credible and detailed. It must explain what to do with the judiciary, the economy, the environment, the rights of minorities, and all challenges of society. This plan of action must design the Iran of the future. The leadership must have proof that it has the capacity, strength, and charisma that makes it possible for the alternative to carry out its plan. The alternative must be pluralistic. It must include all political tendencies, religious beliefs, and the entire society. It can’t be just a part of society. It must include liberals, conservatives, and left and right. “We’ve heard this question a lot that what will come after the regime is toppled, claiming there will be chaos. This is not true. The alternative should guarantee democracy. It would be nonsense to replace one dictatorship with another. The alternative should ensure that the dictatorship will be replaced with a democracy. No Shah, no theocracy.”

My conclusion after many years of cooperation with the NCRI and the People’s Mojahedin Organization of Iran (PMOI / MEK) is that, with all respect to all organizations and movements, “If there is one organization that has the characteristics of an alternative able to lead the transition from dictatorship to democracy it is the NCRI led by Maryam Rajavi.”

“The revolution has now gone on for four months. This shows the deep-rooted nature of the insurrection. Young people, led by women, have now become a recognized existential threat to the mullahs’ dictatorship.” The mullahs are doing everything in their power to crack down on the protests, including four executions of protesters. There have been 500 executions in the past year. This is the regime we’re dealing with. The regime has tried its utmost to annihilate the MEK. Having failed in their ability to annihilate the MEK, they began a campaign of vilification and demonization. The regime identified journalists in the West as soft targets and used them to spread their ludicrous propaganda against the MEK and NCRI.

Now, this campaign moves into top gear with the regime calling the MEK an Islamist Marxist group. I’m a conservative, Paolo’s a socialist. “We have supporters from all views across the world supporting the MEK. Over the past 40 years, the MEK has been the first and only serious opposition to the regime. The mullahs have trotted out a cyber-attack. Treadstone exposed how the IRGC and the ministry of intelligence of the regime flooded Twitter with 112,000 tweets targeting the MEK. More recently, the regime targeted the infrastructure of Albania with cyber-attacks. Albania closed the regime’s embassy and expelled their so-called diplomats. The UN Human Rights Council has agreed to establish a probe into the regime’s repression of the nationwide insurrection. There should be no impunity for those responsible for these atrocities. They must be held to account for these crimes. We call on the US, EU, and all democratic countries to take practical steps to stop these executions in Iran. If we remain silent, it will lead to more executions. Words are not enough. We need hard actions. We must withdraw our ambassadors from Tehran, close our embassies, shut down the regime’s embassies and expel their agents. That’s when we can start helping establish democracy in Iran.”